So, on 27th of May 2022 I was admitted into Gosford District Hospital. I knew before seeing the Emergency Department Doctor that I was going to be admitted under my previous Vascular team, the same team I have had for over 4 years and the best team possible in my personal opinion. How did I know? The simple answer is because of the way the diabetic ulcers on my foot were worse than ever before (as you can see in the picture directly below this paragraph) and after months of oral medications from my GP nothing worked. Anyone that knows me knows I would tell my caseworker to take me to the hospital as I hate them with a passion, doesn’t matter which one I hate them. So for them to get a phone call from me to say I NEED to go to hospital and now they knew something serious was going on. 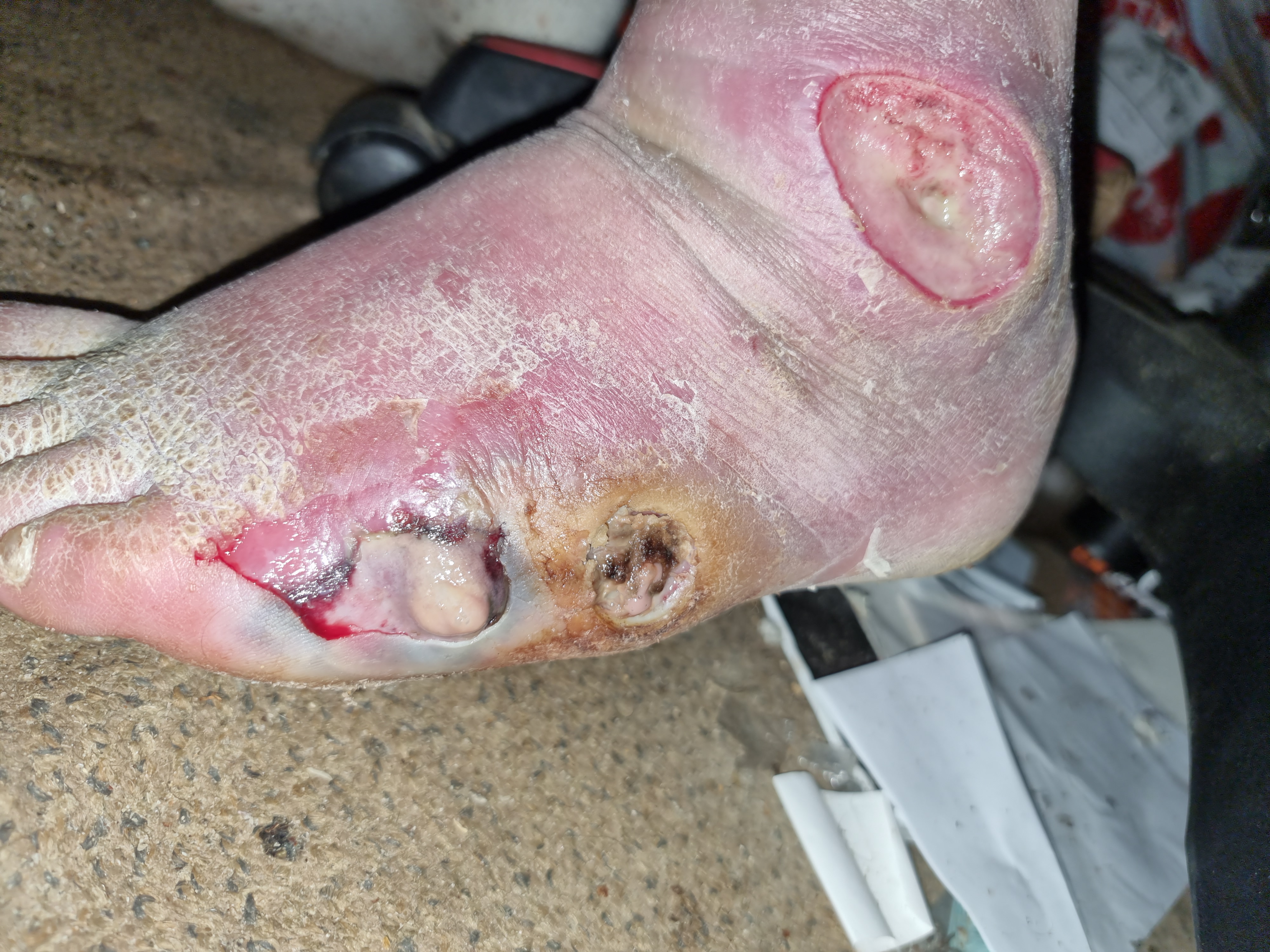 The wounds that ended up putting me in hospital.

My caseworker came and picked me up from home and I went with a big of items that I would need for my hospital stay and depending on the length my caseworker could get whatever was needed from home. We arrived at the hospital and saw the triage nurse and then into the waiting room. And it appears I was put into a high category to be seen cause the place was packed full of people, as it always is, but I was in a bed and seeing a Doctor within 30 minutes, which is a miracle, it’s usually 4+ hours waiting to be even seen.

After the Doctor came around he was concerned and said he was paging the Vascular Team. I asked him which team and he said Doctor Bourke Sr. That was great news to my ears as that is the team I have dealt with for years. Not long after he returned with the news that I was expecting, I was being admitted and the team would be down to see me shortly in the Emergency Department room.

When they got down they were shocked at how bad it looked and not long after I was taken to the ward. I was taken to K4 and given a single room at the request of my Vascular Team as they know how certain things are very difficult for me. I was told I would be going into surgery the next morning for a debride and to see how bad it was inside the foot. I signed off and that and also gave them consent to do additional procedures if it was extremely necessary.

The next morning I had a COVID 19 RAT test before being taken to the operating room, something they are doing at this hospital for all patients before they have their operation. It came back negative as expected and off to the operation room I went. Several hours later I woke back up on my ward and my foot was fully bandaged up, which surprised me for a simple debride. It wasn’t until the next morning when my team came around, early as all fuck like normal that I realized what happened when they undressed the bandages. 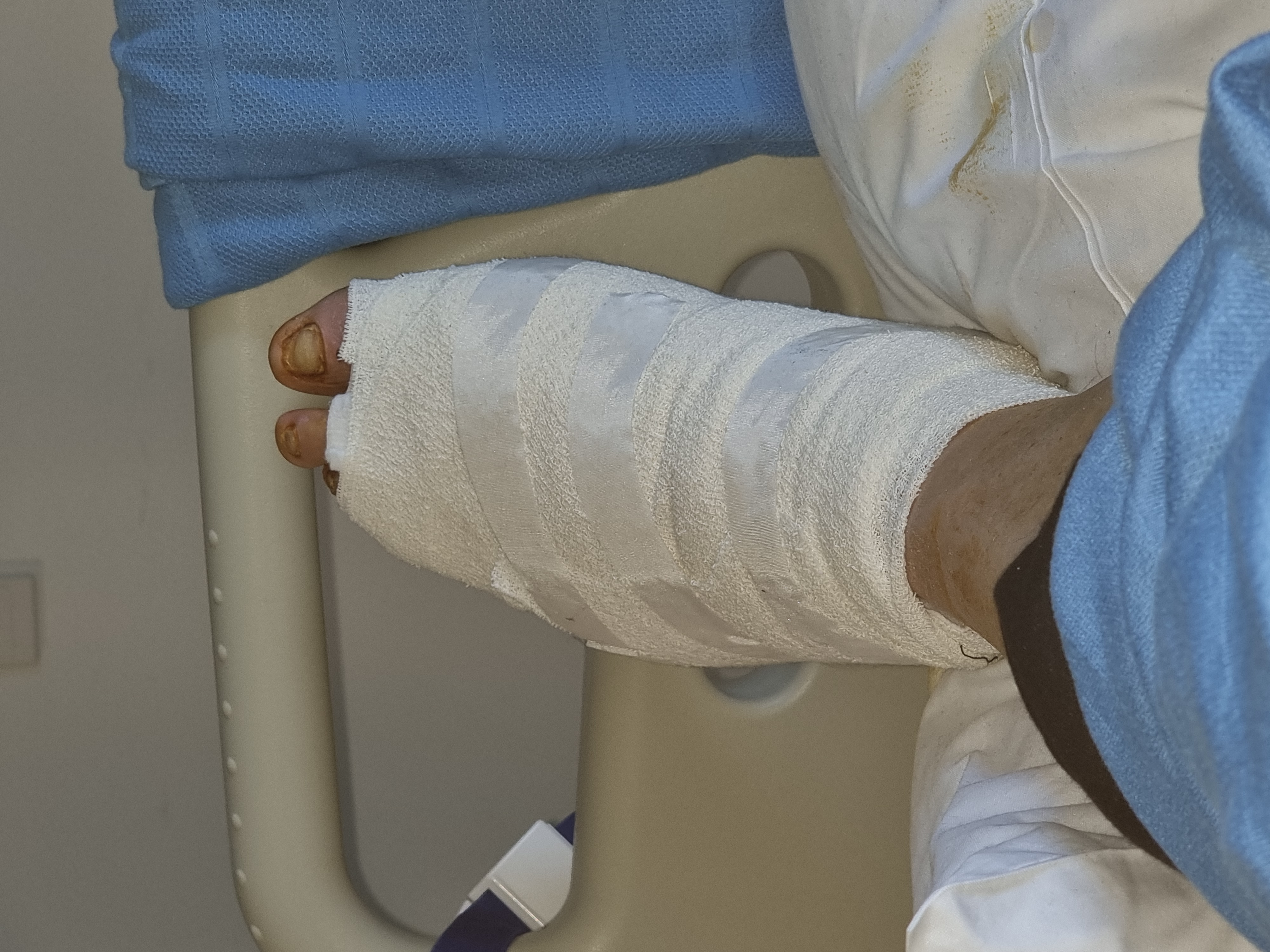 What I first saw after surgery one.

What did I find? My small toe had been amputated. Great now I was gonna live with missing my little toe on both feet after the one on the right leg was amputated just over a year prior. This is what was seen … GRAPHIC WARNING

These images are taken the day after the first surgery. They are very gruesome and horrible, but this is the reality of what diabetes can do when you start getting foot ulcers and they can’t get them under control.

So, since the above images show what it looks like the day after the surgery where my foot was drained of puss and other liquid and as well had my little left toe amputated I was told they needed to do another surgery to remove the next toe. So, thinking they are saving my leg, life and I will still be able to walk I agreed to have this done.

A few days later I was taken for the second surgery and expected it to be the last one needed. But how wrong I was. Below are the images from the removal of the second toe the morning after. Again this is a GRAPHIC WARNING – THESE ARE THE WORST IMAGES EVER

This end the first two surgeries that I had to go through within several days. In Part Two of The Amputation Story you will hear about me being told I am about to lose my leg below the knee, the after pictures (which are not anywhere near as graphic as the first two surgeries), my feelings, how I am coping and what the future lies ahead for me. I will try to get Part Two up in the coming days.

Note: I will not be held responsible in any way shape or form if you are effected by the images posted within this post. There are plenty of warnings within about grapic content within.