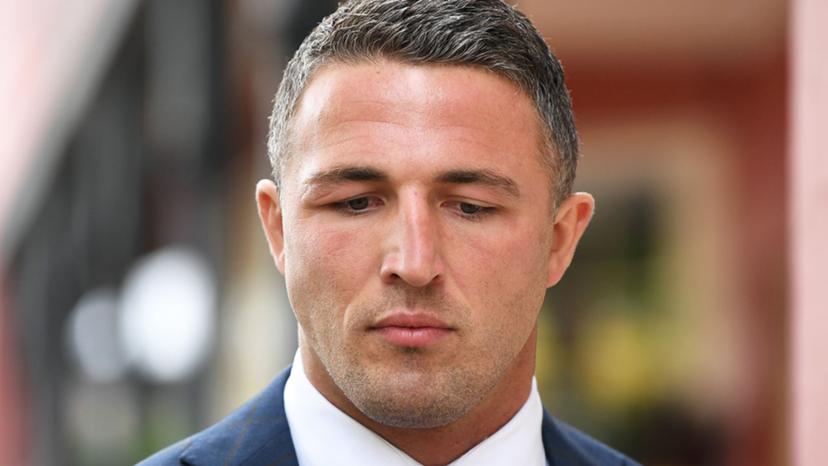 A NSW magistrate on Friday found the 32-year-old had yelled “f*** you, I’m going to get you” 20 centimetres from Mr Hooke’s face during an expletive-riddled rage, sparked when Burgess was asked to leave the Hookes’ Southern Highlands property in October 2019.

Burgess was found guilty of intimidation, having intended to cause Mr Hooke fear of physical or mental harm.

The retired star was sentenced to a two-year community corrections order, requiring him to be of good behaviour.

“I’m confused with the decision, I will appeal the decision and I won’t say anything further,” Burgess told reporters as he left court.

Burgess had denied swearing in the home and cast the father of his estranged wife Phoebe Burgess as the aggressor.

Ultimately Burgess’s own words undermined his defence, the magistrate found.

The former footballer conceded his father-in-law did exclaim “What are you going to do? Hit a 64-year-old man?” during the incident.

But – disputing Mr Hooke’s evidence that the statement came after Burgess aggressively yelled centimetres from his face – Burgess said it occurred when the men were metres apart on the property’s driveway angrily cursing each other.

“Surely such words could only be uttered after a close encounter,” the magistrate said.

Burgess also texted his estranged wife 20 minutes after the encounter that her father had been “provoking me”.

#Breaking – Sam Burgess has been found guilty of intimidating his ex-father in law during an argument at the family property in 2019. ⁦@7NewsSydney⁩ pic.twitter.com/eQYwBfH03B

“I find the words used … (is) a concession on his part that he was the aggressor,” Mr Rabbidge said.

Noting people in a highly emotional state can say things they later regret, the magistrate accepted Burgess had become annoyed and angry when told to leave the Hookes’ Daffodil Downs property in Glenquarry before Ms Burgess returned.

Mr Hooke in October testified his own calm words were rebutted with “f*** you, I’m going to get you, you orchestrated all of this”.

“Six foot five, 118 kilograms, threatening to hit me, I was terrified,” Mr Hooke told the court.

“I had never felt fear like it. My whole body went cold.”

“What is incontrovertible is the shock and distress that Mr Hooke displayed to his daughters and police,” the magistrate said.

Burgess’s legal team had alleged Mr Hooke and Ms Burgess set out to harm Burgess’ career and reputation by making the allegation and orchestrating a damaging expose on the retired Rabbitoh published by News Corp Australia in October 2020.

“I do not accept that Mr Hooke was so spiteful that he would set out to make a false claim to harm Mr Burgess’s career,” the magistrate said.

Burgess retired in 2019 after a 270-game NRL and English Super League career and stints with England’s national rugby union and rugby league sides.

He stood down from roles as a commentator and South Sydney assistant coach in October.